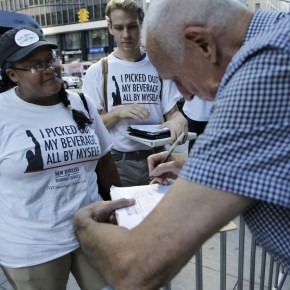 NEW YORK — Soda makers, restaurateurs and other businesses sued Friday to try to block the city’s unprecedented move to restrict sales of super-sized, sugary drinks, an effort the city called a coup for public health but the industry views as unfair and undemocratic.

“For the first time, they’re telling New Yorkers how much of certain safe and lawful beverages they can drink,” said Caroline Starke, a spokeswoman for the business groups, whose complaint also faults the city for making the decision through an unelected board. The groups include the American Beverage Association, the National Restaurant Association, a soft drink workers union and groups representing interests ranging from movie theater owners to Korean-American grocers.

A spokesman for Mayor Michael Bloomberg, the regulation’s chief champion, called the lawsuit a groundless effort to stop a groundbreaking policy.

“This predictable, yet baseless, lawsuit fortunately will help put an even greater spotlight on the obesity epidemic,” said the spokesman, Marc LaVorgna, who noted that the city also won fights over outlawing smoking in bars and offices and forcing fast-food restaurants to list calorie counts on their menus.

The beverage industry hinted it was considering a suit as soon as the city Board of Health approved the regulation last month. The rule would stop restaurants, cafeterias and concession stands from selling soda and other high-calorie drinks in containers larger than 16 ounces. It’s set to take effect in March.

Bloomberg has called it a reasonable way to fight an obesity problem that takes a toll on many New Yorkers’ health and city hospitals’ budgets.

The measure keeps people from drinking extra calories without thinking, he says. For someone who drinks a soda every day, for example, downing a 16-ounce Coke instead of a 20-ounce one trims 14,600 calories a year, or the equivalent of 70 Hershey bars.

“Nobody is banning anything,” the mayor said when the plan passed, noting that someone who wanted a second soda could get one.

The soda makers and sellers say the city is being a nanny-like nag to consumers and imposing an unfair, uneven burden on businesses. Manufacturers will have to get new bottles, and eateries will lose sales to competitors that aren’t covered by the rule, they say. A customer who couldn’t buy a 20-ounce soda at a pizzeria would be able to get a Big Gulp at a 7-Eleven, for instance, as convenience stores are under different regulations.

“(The rule) unfairly harms small businesses at a time when we can ill afford it,” the suit says.

It also says the Bloomberg-appointed health board shouldn’t dictate the size of soft drinks. Ten City Council members signed onto a July measure calling on the health board not to approve the rule; a New York Times poll in August showed that six in 10 New Yorkers opposed it.

The city says the board, made up of physicians and other health experts, is exactly the panel to make such decisions. It has held sway over matters ranging from milk inspection in the 1870s to banning lead paint in 1960, the city notes.