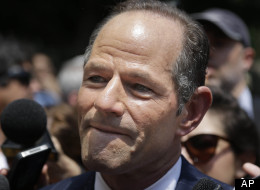 Some of the holes in Spitzer’s financial portrait were filled in by mandatory paperwork he submitted Wednesday to comply with city election laws. The Conflicts of Interest Board, or COIB, forms shed some light on the money he made last year from broadcasting, investments and Manhattan real estate, but are not as specific as a federal tax return.

Campaign spokesman Hari Sevugan said in a statement to HuffPost that the disclosures should eliminate doubts about Spitzer’s transparency.

“Between multiple years of tax returns showing his income, total deductions and tax rates, as well as the COIB disclosure which relays the source of his income, and percentage holdings in various investments, we have released a significant amount of financial information to allow reasonable people looking to make an informed decision to the opportunity to do so,” Sevugan said.

The first two pages of the IRS forms from 2012 and 2011 give voters a slightly more detailed peek at Spitzer’s earnings and taxes than what his campaign had been willing to reveal on Tuesday.

The abridged version of the forms show that the ex-governor and his wife Silda Wall made almost $4.3 million in 2012 and nearly $3.8 million in 2011.

The couple claimed $1,464,812 in wages and salary in 2012. But the exact sources of their earnings are impossible to sort out without the full documents.They made $2,559,463 in a nebulous category that covers rental real estate, royalties, partnerships and trusts. There were capital gains of $167,402. Smaller amounts of dividends, business income and taxable interest rounded out their total earnings.

Spitzer lists his job as “executive” and his wife is an attorney. They asked for an extension past the April 15 deadline to file their taxes and collected a refund of $266,115.

They claimed a capital loss of $3,000 that year and had lower earnings from dividends, business income and taxable interest. Unlike 2012, they filed on time, but had to pay the federal government $113,360.

Spitzer’s complete returns would show each individual source of income. Voters would also see things like charitable contributions, mortgage interest and significant medical expenses — if indeed the couple had any.

In previous runs for attorney general and governor, Spitzer released his complete income tax returns. His reluctance to do so this year opened him to charges of hypocrisy, because he’d criticized Mitt Romney for guarding his taxes during the presidential election.

Those questions were partially answered by the forms Spitzer submitted to the Conflicts of Interest Board, which requires all candidates to answer questions about income, business connections, debts and gifts.

Spitzer’s contract with CNN is worth $500,000 or more. As the son of a real estate tycoon, he has a stake in five Manhattan buildings that each brought in at least $500,000 last year.

A private property he owns in upstate Columbia County was valued at more than $500,000.

The campaign had previously announced the total income, but didn’t break it into the broad categories seen in the IRS documents. The campaign had also said what the Spitzers paid in taxes for both years. About 49 percent of their adjusted gross income, or $2.094 million, went to federal, state and city taxes in 2012, according to his campaign. The year before, $1.489 million, or 39.5 percent, of the couple’s income was taxed.

Stringer’s campaign blasted Spitzer for maintaining a level of secrecy about his money.

“What did Eliot Spitzer release today? Nothing. Simply put, repackaged information that is nothing more than a cover page. Not a detail included about the source of his income, wages, or investments,” said a statement from campaign spokeswoman Audrey Gelman. “This is a disingenuous attempt to make the story go away, which should only raise more questions about what he’s trying to hide. And yet another example of Eliot believing one set of rules apply to him, and another for everyone else. We will continue to request that Eliot meet the standard of transparency he once championed by releasing five years of full financial disclosure.”