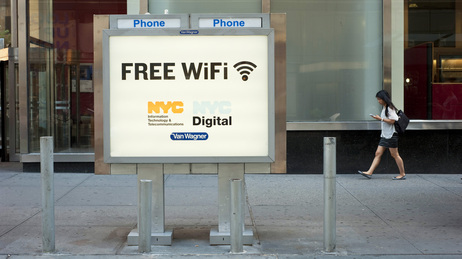 Mark Thomas is using a pay phone, but he isn’t paying. And physically, he’s not even that close to the phone.

He’s sitting on a bench on the street in Astoria, Queens, checking email on his netbook. It’s grabbing an Internet signal from a military-grade antenna on top of a pay phone down the block.

“It’s not the speediest but you can’t complain about free, right?” Thomas says.

Thomas has tracked pay phones since 1995 at his website, The Payphone Project. This payphone is part of a pilot project converting New York City’s pay phones into Wi-Fi hot spots, launched by the city and pay phone operators, in this case an advertising company called Van Wagner. When Thomas logs on, a new entry appears on the computer of Van Wagner executive Pete Izzo.

“I can actually click on and look at the actual calls — I call them calls, they’re not really calls — the logins as they actually happen,” Izzo says.

On a recent afternoon, only two people have logged on at Thomas’ phone. But Izzo says these numbers could grow into something that could stop pay phones’ long death spiral: They’ve gone from about 2 million across the country in 2000 to less than a quarter of that today.

“We see gems in other people’s junk,” Izzo says.

He sees in pay phones a kind of buried treasure — literally. “Basically the conduits under the street — bandwidth and electric — bring magic to the street corner,” Izzo says.

Magic that could go beyond just Wi-Fi. “Security devices, snifters for the air, cameras … Could they be banking centers someday?” Izzo says. “Sure they could.”

The city is taking suggestions and encouraging experimentation to make pay phones more useful, but this isn’t the first time. The first Wi-Fi hot spots at pay phones in New York City were launched in 2003.

“People have tried it over the years, but so far I’m not aware of any that have been turned out to be financially successful,” says Randy Nichols, president of the American Public Communications Council, a trade association for pay phone operators.

Nichols thinks the main challenge for these would-be pay phones of the future is actually paying for them.

Tom Keane, the chief executive officer of Jaroth-PTS, one of the nation’s largest pay phone owners, says the solution could be advertising. That’s already the case in New York City.

“That hasn’t been a pay phone business for a very long time. That’s been a media display ad business hidden in a phone booth,” Keane says.

A pay phone in New York typically grosses less than $100 a month from actual calls. They can generate nearly 10 times that much just from the poster-sized ads on the booths’ sides.

If Wi-Fi hot spots or Internet touch screens catch on, Keane thinks they could become advertiser-funded, too. And that could make more than just Internet access free, according to Izzo.

“The cost of actually providing a phone call is so low we hope to be able to give that away also someday soon,” he says.

The pay phone of the future might not be a pay phone at all.