Architectural renderings allow us to peer into the future of our beloved city without a crystal ball. New York City has some big changes coming, and here are 17 future attractions that will transform the Big Apple as we know it.

This summer a multibillion dollar plan will finally get underway to brighten up the dank rail station and better accommodate the 600,000 people that pass through it each day. But it’ll be a while before the much-maligned space looks fresh and tidy. Madison Square Garden, which sits on top of the transit hub, renewed its permit to occupy the space earlier this year. But MSG’s previous 50-year permit was renewed for only 10, setting up a dispute between the City Council and MSG’s owners, who are facing mounting pressure to relocate. END_OF_DOCUMENT_TOKEN_TO_BE_REPLACED

Workers lifted the first section of the 408-foot spire to the top of One World Trade Center Wednesday morning. When completed, the spire will bring One WTC to a staggering 1,776 feet tall, making it the tallest building in the Western Hemisphere.

Since November 16, nine of the sections have been traveling 1,500 nautical miles to Lower Manhattan via a barge from Canada. END_OF_DOCUMENT_TOKEN_TO_BE_REPLACED

The Port Authority released a series of renderings of the completed glass and steel building at West and Vesey streets. These are the first new images released to the public in five years, and revealed a few design tweaks from previous pictures. 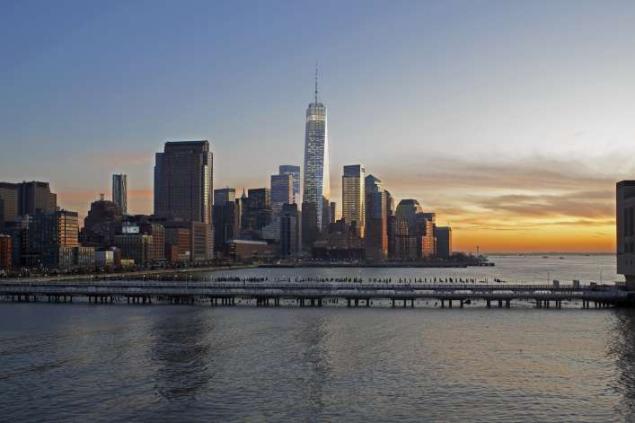 This computer generated updated artist rendering, incorporating recent design modifications, released by The Port Authority of NY & NJ and The Durst Organization, in New York, Tuesday Aug. 7, 2012, shows an evening view of One World Trade Center, center, from Pier 40 on the Hudson River. The new images show a spire exposed directly to the elements. Plans still call for the spire to rise to a symbolic 1,776 feet. The images display a new design for the first 20 stories.