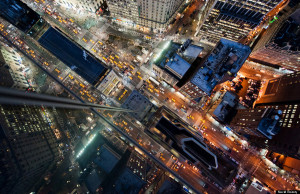 
NEW YORK — An 80-foot Norway spruce that made it through Superstorm Sandy was transformed into a beacon of shimmering glory Wednesday when New York City Mayor Michael Bloomberg and others turned its lights on at Rockefeller Center.

Thousands of onlookers crowded behind barricades on the streets that surrounded the center during the traditional tree-lighting ceremony for the Christmas holiday season. A video screen projected an image of the tree for those who did not have a direct line of sight.

“It makes me want to sing and dance,” said Zuri Young, who came several hours early with her boyfriend to watch the lighting for the first time. END_OF_DOCUMENT_TOKEN_TO_BE_REPLACED

One of New York City’s most famous photographs turned 80 Thursday. “Lunch Atop A Skyscraper,” showing 11 workers eating lunch while sitting on a steel beam 800 feet above Rockefeller Center, was taken on September 20, 1932. END_OF_DOCUMENT_TOKEN_TO_BE_REPLACED

CDZA, a group of musicians who you may remember from “The Human Jukebox,” is back with a great new video tribute to New York City streets and their famous musician namesakes. END_OF_DOCUMENT_TOKEN_TO_BE_REPLACED