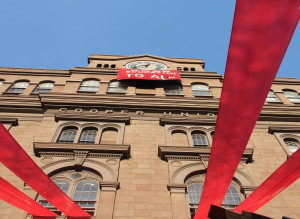 NEW YORK — For more than a century, Cooper Union has been a one-of-a-kind meritocracy: Open to any student qualified to walk through its doors. For free.

Its founder envisioned higher education open to all – regardless of race, gender or class – an ideal that has remained the prestigious school’s most cherished principle since 1902.

But a lot can change in 100 years. Cooper’s Board of Trustees is expected to vote later this month in favor of a proposal to charge its undergraduates something – anything – for their education.

Angry alumni have penned letters. Students have protested, even occupying part of university building where Abraham Lincoln gave a famous anti-slavery speech. But they’ve all run up against a hard reality: Money woes caused by the economic collapse and rising costs mean Cooper can no longer afford the perk that has been held up as a sacrosanct part of the school’s identity.

“It’s a math problem for me: We need to raise money and stop expenses and I can’t believe we can’t raise money in New York City,” said sophomore Diego Gonzalez, 19, a student council member and architecture student. “The full tuition scholarship is what distinguishes Cooper from other top colleges.”

But the nearly 1,000-student university’s financial problems are more serious than any one-time fundraising effort, the administration claims. Last year, the school started charging tuition for graduate classes and has asked the college’s three schools – architecture, engineering and art – to help tackle a $12 million annual deficit.

“I would say yes, this is an anguishing time and some of these issues are deeply troubling,” said the school’s president, Jamshed Bharucha. “We have no choice but to confront them squarely and we are doing that.”

Although administrators don’t yet know how much they’ll have to charge, the proposal is intended to put the school on firmer financial ground after 45 years of stopgap measures like property sales and loans have been used to maintain the scholarship amid ever-rising costs, Bharucha said.

And while opponents don’t dispute the school is strapped for cash, they charge administrators are trying to expand the school out of its money woes rather than shrink it enough to stay true to founder Peter Cooper’s vision.

“I think Peter Cooper wanted this school to be a model for a level playing field for higher education,” said Joe Riley, 22, a senior in the arts school and a member of the Occupy Cooper movement that in December took over part of a building where Lincoln gave his “right makes might” speech. “You can’t buy your way into Cooper.”

Riley and others maintain students shouldn’t be punished for the bad financial planning of administrations past. They are particularly critical of the 2009 construction of a $177 million building on campus – for which the school pays $10 million a year on a $175 million loan taken out just before the economy cratered in 2008.

Cooper counts famous artists and architects – including Daniel Libeskind, designer of the Ground Zero reconstruction master plan – among its graduates but hasn’t mounted the kind of aggressive alumni fundraising campaigns other institutions have used to make ends meet.

Photographer Jay Maisel, who shot the iconic “Kind of Blue” album cover for jazz great Miles Davis, said he wished the school hadn’t borrowed so heavily but doesn’t see an easy solution – including hitting up alums for cash.

Art professor Mike Essl wondered why the administration seems bent on forcing students to pay when it could try cutting expenses instead, especially as one of the school’s biggest cash cows – the land beneath the Chrysler Building – will benefit from a rent increase in 2018.

“It feels to me the Board of Trustees has given up,” said Essl, 38, a Cooper graduate himself who now teaches graphic design.

All parties agree Cooper is a unique place, as desirable and selective as many Ivy League schools. Located smack dab in the city’s bustling East Village neighborhood, the school does not have a college campus’ traditional grassy quad and students are more likely to smoke cigarettes outside the Foundation Building where Abe Lincoln gave his speech than play Frisbee or Hacky Sack.

They’re also keenly aware of the school’s storied history. Industrialist Peter Cooper, who founded the school in 1859, wanted it to be open to all. Then, in 1902, after a generous gift from Andrew Carnegie, the school was able give a full-tuition scholarship to every student it admitted.

But Peter Cooper probably couldn’t have envisioned the current price tag would be $38,500 a year. And he likely would have been flummoxed by the ever-increasing expense of higher education: The cost of a four-year private college rose 4.2 percent between the 2011-12 and 2012-13 school years, according to the College Board’s Trends In College Pricing.

Cooper’s financial plight has students at the handful of other schools that offer similarly generous aid packages worried their institutions could be next.

In late February the Board of Trustees at Grinnell College in Iowa – which provides 90 percent of its students an average aid of $35,388 – engaged in a grueling 18-month debate before it voted to sustain the school’s need-blind admission policy for only two more years. After that, the board could do away with need-blind admission if the college isn’t able to raise the funds to keep it.

At the handful of other schools that provide full tuition coverage, the debate at Cooper Union is a reminder of the ever-present realities of balancing their long-standing commitment with rising costs.

The Curtis Institute of Music in Philadelphia has provided full tuition scholarships to qualified students since 1928. Curtis is smaller than Cooper – just 165 students – but its administrators have adopted a pay-as-you-go policy, carefully planning out fundraising initiatives while also mapping out budgets.

“We’d be nuts not to be concerned,” said Elizabeth Warshawer, an executive vice president at Curtis. “Every year we have a lot of money to raise, every year more than the year before.”

Cooper Union’s tuition debate has also affected alumni at Berea College in Kentucky, which admits only low-income students and offers them all a tuition-free education. One alumnus, Army 2nd Lieutenant Evan R. Robinson, was so moved upon seeing Cooper Union’s tuition proposal that he wrote the school’s president while serving in Kandahar, Afghanistan.

“I pray that Berea College never falls into the same traps as Cooper Union,” Robinson wrote.