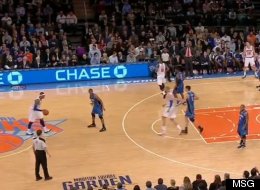 NEW YORK — Carmelo Anthony scored 20 points to set a team-record with his 30th straight 20-point game, leading the New York Knicks to a 113-97 victory over the reeling Orlando Magic on Wednesday night.

Anthony’s scoring overshadowed outstanding games by New York big men Tyson Chandler and Amare Stoudemire who combined for 35 points on 17 of 18 shooting from the field against the Magic, who lost their seventh straight and 18th in 20 games.

Chandler finished with 21 points on 10 of 11 shooting, along with seven rebounds and a season-high five assists. Stoudemire hit all seven of his shots and scored 14 points as the Knicks beats Orlando for the third time this season.

JJ Redick scored 29 points and fellow guard Jameer Nelson added 21 for Orlando, but they both ran out of gas in the second half when the Knicks took control, especially on the inside. Nikola Vucevic was the only other player in double figures for the short-handed Magic with 12 points and 11 rebounds.

Raymond Felton added 15 points and J.R. Smith and Pablo Prigioni had 11 for New York, which shot a season-high 57.3 percent from the field.

Orlando came into the game without leading scorer Aaron Afflalo and it lost another starter a little more than four minutes into the game when power forward Glen Davis broke his left foot.

That gave Chandler and Stoudemire a free run on the inside and New York dominated, outscoring Orlando 54-42.

The big run came in the third quarter right after Redick hit a 3-pointer to tie the game at 62 with 7:20 to go.

Chandler, who had been in double figures only once in his last seven games, tipped in a rebound and scored on an alley-oop from Smith and Stoudemire tallied on a driving layup for a 68-62 lead.

The Magic twice cut the deficit to four points, but Stoudemire slammed home a dunk and Prigioni nailed a 3-pointer to stretch the lead to 75-68 and Orlando never threatened again.

Nelson and Redick kept the Magic in the game in the first half, combining for 36 points on 14 of 20 shooting from the field. Redick made his first seven shots, including three from long range, and didn’t miss until late in the half.

Nelson was 7 of 11 from the field and handed out four assists in the half.

Anthony seemed content to let his teammates do the shooting in the first half. He missed his first two shots and finished 4 of 7 for nine points.

Chandler, who came into the game averaging 11.7 points, led New York with 13 points, one more than Felton, who picked up three fouls. Smith came off the bench and scored eight points.

NOTES: Richie Guerin had the Knicks old record of 29 straight 20-point games, set in 1961-62. …This is the second game on a four-game road trip for Orlando, which has games left at Boston and Milwaukee. …New York is 16-6 at home this season. …The Knicks played without backup point guard Jason Kidd, who was out with a sore lower back. …Afflalo, who was averaging 16.7 points, missed his second straight with a strained left calf.