A record 217 New York City elementary and middle schools received grades of F, D or a third consecutive C on the city’s annual progress reports, placing them at risk of being closed.

The list of schools earning poor grades is nearly twice as long as last year’s and represents almost a fifth of the 1,193 schools that were rated, the New York Daily News reports. 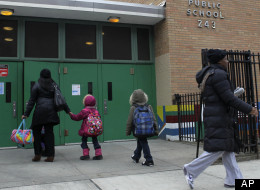 Education Department officials told the New York Times that in addition to D and F schools, they will also examine “triple-C” schools — those that received a “C” this year and a “C “or worse the previous two years. The number of schools in this category skyrocketed from 5 last year to 114 this year, which contributed to a higher flunking rate.

Of the 24 “turnaround schools” targeted for closure that were the subject of a union lawsuit in July, two of the seven elementary schools earned a B rating, while the remaining five received C’s, reports the Daily News.

According to the Times, the methodology for determining a school’s grade changes somewhat from year to year, but is largely based on improvement in students’ scores on state math and reading standardized tests administered to all third through eighth graders. The formula also takes into account attendance and input from parents, students and teachers.

Seventy-five percent of a school’s score stems from comparing it to a “peer group” of about 40 other schools with similar student populations. The remaining 25 percent is based on a comparison with all schools citywide serving the same grades.

The Daily News reports that of the top 10 schools receiving an “A” designation, half were charters. Forty-six percent of charter schools earned “As,” compared to 25 percent of traditional public schools.

According to the DOE, grades remained stable across the city, with 86 percent of schools not changing by more than one letter grade from 2011. That said, as the Daily News points out, nearly a quarter of the 103 schools that earned a D or an F this year received an A or B grade last year.

High school grades are slated to be released later this month. Last year, 32.7 percent of high schools received an “A” — down 15 percent from the previous year. City officials said the decrease was attributable to stricter graduation requirements and initiatives to raise college standards.