July rents hit a new record high, but with more inventory on the market than usual, a drop in prices is a possibility. 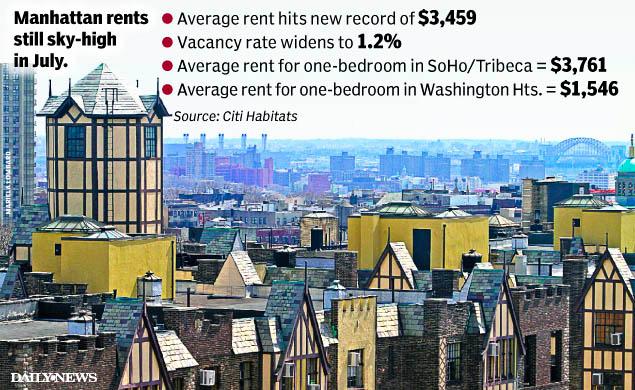 Relief could be finally on the way for the Manhattan’s beaten down renters.

While the borough’s sky-high rents hit new heights in July, the vacancy rate widened for the second month in a row, meaning rents may have reached their tipping point.

The average rent for a Manhattan apartment was $3,459, a 3% jump from last year, setting a new record, according to Citi Habitats.

With substantially more inventory on the market in what is usually a very busy rental month, lower rents could be around the corner.

“It was unusual that the city’s vacancy rate climbed during the summer months,” Citi Habitats’ president Gary Malin told the Daily News.

Sarah Marshall, a 23-year-old operational manager for Target, said her apartment search went much smoother than she expected.

Marshall recently made the decision to move out of her parents’ home. Within 24 hours her agent Morgan Turkewitz of Citi Habitats, found her something she liked: a studio in a walkup building on 75th St. between First Ave. and York Ave. The rent is $1,650.

“I heard the horror stories,” Marshall said. “It was the easiest thing.”

One reason Manhattan’s inventory of rentals is growing: recent college grads who usually do their apartment hunting during the summer are putting off the search because the rents are simply too high.

At the same time, there has been an increase in the sale of starter apartments, meaning more people are choosing to buy rather than rent.

As usual, rents in Manhattan varied greatly in July based on the neighborhood.

The average rent for a one bedroom in SoHo/Tribeca was $3,761. On the Upper East Side, the same category of apartment went for $2,404 and in Washington Heights it was $1,546.

While inventory is climbing, Malin cautioned renters about getting too optimistic.

“Rents are still increasing slightly month over month,” he said. “What renters really want to see is those prices start to dip, and despite the slight increase in available inventory, that just hasn’t happened yet.”