Not much offense, but left-hander goes seven solid innings allowing just one run and three hits while striking out five as prospect Zach Wheeler moves up to Triple-A Buffalo. 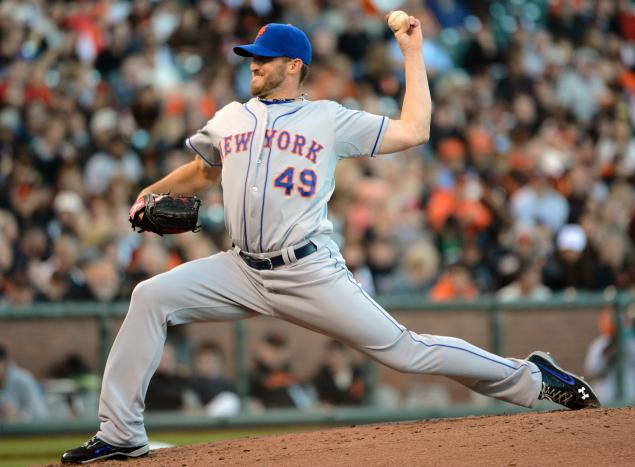 SAN FRANCISCO — The goal is clear for Jon Niese, from here until early October, and the Mets are brainstorming ways to make it happen: Stay on the field, so there can be more nights like this.

The 25-year-old lefthander, who allowed three hits in seven innings in Wednesday’s 2-1 win over San Francisco, has exhibited flashes of dominance in his young career — but due to strained hamstrings and oblique muscles, he has never been able to avoid the disabled list for an entire season.

“Obviously the biggest thing is, we have got to keep him on the field,” Terry Collins said. “You look at pretty much the month of September, he hasn’t pitched, and we’ve got to make sure this year that we keep this guy on the field throughout the season.”

Niese is one of several precarious members of the rotation; Chris Young and Johan Santana are still recovering from major shoulder surgery, and Matt Harvey will be allowed to throw only about 165 innings, according to GM Sandy Alderson. Collins said that Santana’s sprained ankle had healed, and he expected the lefty to start next week.

“Yes, we have been trying to come up with a couple of situations,” Collins said. “As we head toward the last six weeks of the season, will it help Chris Young or Santana or even Jon Niese to have an extra day now and then? I think the answer might be yes.”

Ruben Tejada returns to the dugout after scoring where teammate David Wright awaits with a high five.

As far as Niese wearing down, the Mets have never been able to determine a common cause.

“I don’t know what it is,” Collins said. “Is it a physical thing? What does he do between starts? Is he throwing too much? Should his bullpens at this time of the year be 25 pitches, compared to 50 pitches, or whatever he throws. I think we need to look at all of the angles.”

Collins also believes that Niese is more purposeful in games following a loss; on Wednesday, this theory appeared insightful. Following a defeat in Arizona that included a six-run second inning, Niese allowed just one hit until Buster Posey bashed a home run off the ambulance that rests past the left field wall.

That cut the Mets’ lead to 2-1, earned by Ruben Tejada’s leadoff homer and Jordany Valdespin’s run-scoring fielder’s choice in the second. Their advantage should have been more substantial, given Matt Cain’s inefficiency (97 pitches in five innings), but Ike Davis and Daniel Murphy were caught stealing, and David Wright hung himself up between second and third.

In the eighth, the Mets loaded the bases with no outs, but did not score. The pivotal moment in that frame came when Josh Thole chopped into a double play; the first out came at home plate, the second when Posey’s throw hit Thole in the shoulder. Umpire Dale Scott ruled that Thole had stepped inside the baseline.

The Mets, who stranded 13 runners, left the bases loaded again in the ninth, when Jason Bay lined out to pitcher Brad Penny, and Murphy was out scrambling back to first. But Bobby Parnell finished with a perfect ninth.

WHEELER MOVING ON UP

The Mets on Wednesday promoted their top pitching prospect, Zack Wheeler, from Double-A Binghamton to Triple-A Buffalo. Wheeler, 22, was acquired in July of last year from the Giants for Carlos Beltran. With Binghamton, he went 10-6 with a 3.26 ERA.

Scouts gush about Wheeler, projecting him as a future ace, but Collins said it was highly unlikely the righty would make his major league debut this year.

“I’m anxious to see Zack Wheeler pitch,” Collins said. “Will it be this year? I would doubt it. . . . Everybody is raving about his stuff. It’s the same thing with the young players — he’s got to command it.”