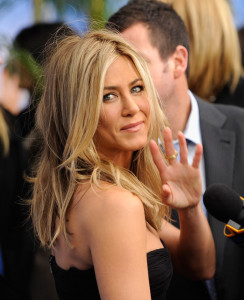 Jennifer Aniston has gone and done it again: She chopped off her hair into a short, chic bob and shocked us all.

On Monday, Nov. 4, Aniston debuted her new short hair while out in Beverly Hills, according to X17Online.com, which obtained exclusive snapshots of the star. The 44-year-old’s blond tresses have been chopped into a short, angular bob that falls just  below the nape of her neck and is longer in the front.

Aniston got six inches of her honey-hued hair cut by Chris McMillan last week, and it was a spontaneous move.

“It’s right at my jaw line, maybe a little longer,” she told Vogue. “It was kind of spur-of-the-moment. I was flipping through the television channels and I paused it to take a picture and I sent it to Chris, and he said, ‘That’s [stylist] Lawren Howell from Vogue!’ And then he said, ‘I just cut that!’ So that’s it. He went way shorter than hers, but she was the inspiration.” “I did it! I feel great. I feel lighter,” she added. “It’s simple, it’s really simple, that’s for sure. But I’m always one of those girls who does a big old chop just to get it really healthy, to repair all the [damage from] hair coloring and stuff like that. And I just got bored, honestly. It’s fun to change it up once in awhile.”

Apparently, the “Squirrels to the Nuts” star had a bad experience with a Brazilian blowout recently and decided to lose the length.

“It wasn’t for a role,” she explained to Elle. “My hair went through a phase – I did this thing called a Brazilian and my hair did not react really well to it … The minute I cut my hair I want it back. Always. It’s a guarantee. I’m trying really hard to love this one.”