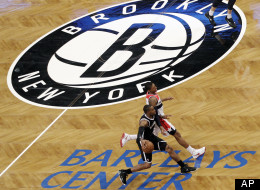 NEW YORK — The Nets brought professional sports back to Brooklyn with a victory Monday night, beating the Washington Wizards 98-88 in the first basketball game at the Barclays Center.

Brook Lopez had 18 points and 11 rebounds for the Nets, who left New Jersey after last season for a new $1 billion home in Brooklyn. They were greeted by 14,219 fans on the night they became Brooklyn’s first major pro sports team since the Dodgers left for Los Angeles in 1957.

Clearly trying for a triumphant opener even in a meaningless preseason game, the Nets brought All-Star point guard Deron Williams back on the floor to help protect a six-point lead with about 3 1/2 minutes left. He fed Gerald Wallace for a basket about 30 seconds later, and exchanged words and technical fouls with Wizards reserve A.J. Price after Price fouled him with 56.5 seconds remaining.

Andray Blatche scored 16 points, Joe Johnson had 14 and Williams finished with 11 points and nine assists for the Nets, 2-0 in the preseason.

The Nets wore their road black uniforms with the word “Brooklyn” across the chest, designed and unveiled by rap mogul and team part-owner Jay-Z in one of his concerts here last month.

His influence, the new home and a flurry of offseason moves have brought the Nets nearly unprecedented attention for a team that was often ignored in its multiple New Jersey homes, no matter how good or bad the Knicks were during that time.

Shortly after the public address announcer greeted fans with a “Hello Brooklyn!” before introducing the Nets’ lineup, Emeka Okafor made the first basket at the Barclays Center. The Wizards led by one after one, and the Nets took a 50-48 lead into halftime.

The Nets assembled a team they think will be a solid competitor during their first season here, re-signing Williams, Lopez, Wallace and Kris Humphries while acquiring players such as Johnson, C.J. Watson, Blatche, Reggie Evans, a quick rebuild for a team that lost 70 games just three seasons ago.

The move to Brooklyn took much longer. Owner and developer Bruce Ratner had to fight off dozens of lawsuits before the project could go forward, eventually selling a majority stake in the team to Russian billionaire Mikhail Prokhorov for enough funding to move ahead.

Minor work is still being completed, but the Nets will deal with any inconveniences after two years at the Prudential Center in Newark while waiting for the Barclays Center to be ready.

“It feels great on all levels to finally be here,” Nets coach Avery Johnson said before the game. “You know, I left the building for two hours today, two or three hours, and just was kind of anxious to get back.”

Seating 17,732 for basketball, the arena sits above the exit to an expanded subway station that is directly accessible by nine lines. Team officials believe the ease of traveling to the arena will help provide them with a home-court advantage that they never found in New Jersey. Fans were into the game, with a chant of “Brooklyn!” breaking out late in the fourth quarter.

NOTES: The Nets are the featured team this season on NBA TV’s “The Association,” a series offering behind-the-scenes access to the team. The debut episode is Tuesday night at 10 p.m. EDT.