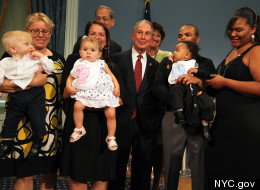 Bloomberg added, “A baby born in New York City has a life expectancy 2.5 years longer than the national average in no small part due to our bold public health initiatives. This means we can expect to see many of the very popularly named Isabellas and Jaydens – like these two little ones with us today – more than 80 years from now.”

Following Isabella, the next most popular names in order for a girl are Sophia, Olivia, Emma, Mia, Emily, Madison, Leah, Chloe, Sofia.

As for the rest of the United States, Sophia and Jacob ranked as the two most popular names in 2011.

Despite the growing popularity of the name Brooklyn throughout the country, Brooklyn did not make an appearance on Bloomberg’s list.