Jake Jolis is a partner at Matrix Partners and invests in seed and Series A technology companies including marketplaces and software.

We recently invested in a team of co-founders who had voluntarily made their own vesting longer than four years. Four-year vesting is the industry standard. Why would someone voluntarily make it longer for themselves?

Their answer: “These days, with companies taking seven to 10 years to reach exit, it would make sense for founders to be on a similar schedule.”

A growing number of founders are starting to realize this. I talked to quite a few about this over the last two years. Mostly, the “longer-than-four-years-vesting” founders share a similar story as well as logic. Almost always they are repeat, experienced founders. Often scarred by a co-founder separation in their prior startup, they are determined to set things up smarter in their next company.

Importantly, this group of founders assumes they are going to be the ones actually building the company. They created the company. They are the company. Nobody is forcing them out. I suspect founders who already believe this about their own startup will find this post most helpful.

Given the massive implications of co-founder vesting schedules, all startup founders should consider co-founder vesting lengths more carefully and then choose what makes sense for them. You make this decision around the time of incorporation but feel the effects over the lifetime of your company.

As far back as the 1980s, the standard startup vesting schedule was four or five years, with five being more prevalent on the East Coast. Nobody seems to remember a time it was anything different. The closest I’ve gotten to a logical answer on why it’s four years today stretches back to a pre-401(k) era, from before Reagan’s tax reforms in the ’80s. Prior to then, tax rules incentivized big company pension plans to have vesting periods of at least five years.

Startups didn’t offer traditional pension plans. Instead, startups offered employees stock, vesting over four years instead of five as a competitive move. That is all moot today. It has no relevance for startup founders in 2020.

More relevantly, time from founding to exit has gone from four years in 1999 to eight years in 2020. Yet founder vesting remains stuck at four. This is dangerous. 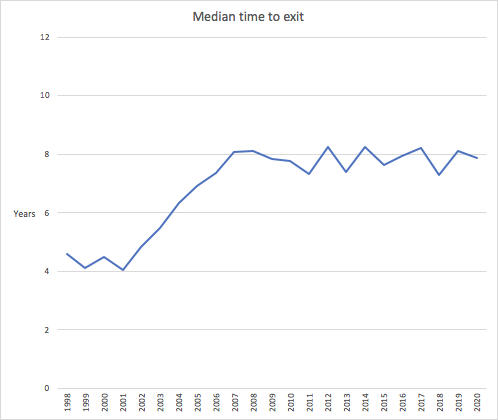 Hedging against the crash of ineptitude